The science fiction gallery page has been updated with the addition of two brand new pieces of artwork, Simulacrum and Into Battle.

These two pieces plus many others will be part of my display in the art show at next month’s Novacon – the UK’s longest-running science fiction convention. This year’s Guest of Honour is writer Mike Carey, perhaps best known for The Girl With All the Gifts. If you’re going, do drop by the art room and say hello!

September 2019 will see the release of my new electronic instrumental album, Mutate.

Mutate will initially be released in digital format on Bandcamp and MusicGlue. Here’s a teaser!

I have added a new page to the ‘Special Projects’ section of the site – my essay on the influence of space travel in music and popular culture – Musica Universalis.

This piece looks at the evolution of electronic music in tandem with the golden era of space travel as well as those eternal musical associations, such as David Bowie’s Space Oddity and the Apollo 11 moon landing.

I wrote lengthy sections on David Bowie, Jean-Michel Jarre and Mike Oldfield, exploring their association with space and how their music is still today, used in conjunction with space travel projects. I also looked at film and television series music in science fiction, and how it’s all connected… If that sounds like your kind of thing, read on!

I have spent a large part of the last six months working on my new instrumental album, Mutate. Now it is time to present some brief previews of the first four tracks.

For those of us whose lives are soundtracked by music, we remember moments of discovery and musical revelation and all other manner of minute details, which are somehow important to us – especially those songs or albums that made a certain impact at the time never fail to evoke certain feelings.

It was with this in mind, that I approached Mutate. I returned to my musical ‘roots’ in a sense, listening again to many albums that had a profound affect on me, and the kind of albums that originally made me want to make music.

However, my own music needed to go somewhere different, so I set myself a specific creative parameter for the new project, which was to – wherever possible – only use sounds that I haven’t previously used. This meant getting rid of old favourites and ‘comfort zone’ instruments that I might normally use for my early demos ideas. This would make me think or work in a new way to achieve the very specific sound, style and atmosphere in mind. I usually have a number of potential titles to work backwards from, but this time, the final upheaval of my normal working process starting work without titles, and seeing where the music went.

My next album project is nearing completion, and will be called Mutate.

Mutate will be released in digital format via Bandcamp, hopefully with a limited CD edition following later in the year.

Watch this space for further details, but meanwhile, here is a brief taster.

I have been working on a new album pretty solidly over the last couple of months, and it is now starting to take shape.

For this new project, I wanted a darker, grittier sound, and I decided to avoid using any previously used sounds, where possible in order to create a fresh sonic landscape.

Here is a brief taster of three current works in progress. Stay tuned for further updates!

There is something life-affirming about the music of Jean-Michel Jarre – the French artist who took electronic music to another level and to a worldwide audience. Jarre injected emotion into his music which touches on the nuances of daily life and the environment around us. Rather than something cold and soulless, there is a warmth and richness to Jarre’s music which has transcended language barriers and reached fans of all nationalities around the globe.

Jean-Michel Jarre has created some of the most iconic and influential music of his generation. This week, Jarre turned 70, (a milestone also celebrated by upcoming box set release, Planet Jarre: 50 Years of Music), which got me thinking about my own journey with his music and its impact and influence on me and my work; both art and music.

We all remember the first time we heard certain songs or pieces of music, and those musical memories from our childhood often remain the most profound, usually defining our tastes for years to come.

I first heard Jean-Michel Jarre’s 1976 breakthrough album Oxygene, as a child in the early 1980s. I was perhaps four or five years old, and I had never heard music like it before. It was the record that my father was playing. To my young ears, I couldn’t quite comprehend what I was hearing – this wasn’t the sound of normal instruments; it was something altogether different and other-worldly. I remember being utterly entranced by the strange, almost organic sounding music… it was as if some kind of captured environment was emitting from the stereo.

With this sensory feast, my young artistic imagination was fired up – the soundscapes and atmospheres of Oxygene transported me into the sky, floating among the clouds; it sent me to a vast snowy expanse with a glaring winter sun, and most significantly, it propelled me out into space, beyond the stars.

At the time, I was surrounded with books of space imagery and science fiction art of the 1970s, and even a young age, I was addicted to Doctor Who. Jarre’s music was the perfect accompaniment to these fascinating futuristic visions, and with that, my lifelong obsession with science fiction and electronic music was born.

I rediscovered my love of science fiction art in 2007, and that led to creating my own artwork (as you can see on this website). And more often than not, I listen to Jarre’s music while I’m working.

However, the biggest impact Jean-Michel’s music had on me, was in making my own electronic music. The decades of enjoying Jarre’s music culminated in me trying my own hand at creating my own instrumental soundscapes – an ongoing journey that I’m still exploring.

I have always been fascinated with the notion of letting music create images in the mind and allowing the imagination to explore new environments through music. With no lyrics to distract or send the listener down a specific path, instrumental music works as a blank canvas for the imagination – and I think we all need that escape. This remains one of the main appealing aspects of Jean-Michel Jarre’s work as well as the objective of my own.

Over the course of the last couple of years with the release of the two Electronica albums and Oxygene 3, Jarre has proven his staying power and influence on artists and fans of all generations. Not one to rest on his laurels, Jarre’s passion for creating, composing and collaborating is as strong as ever, and I certainly can’t wait to hear what the next chapter of his musical journey will bring. 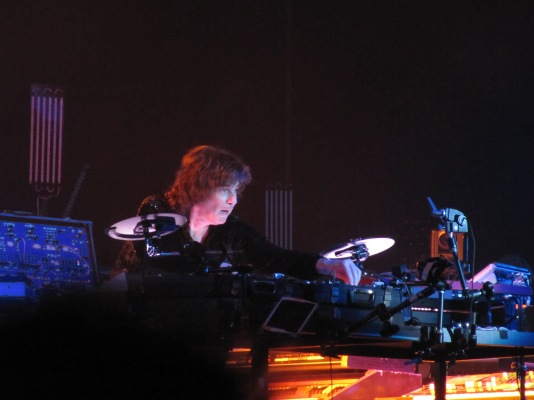 My latest album, Prototype, is published today via my Bandcamp page.

Prototype is an album of dark, heavy instrumental electronic tracks with a subtext of computing, robotics, technology and artificial intelligence. While there is undoubtedly a science fiction edge to the music, much of the album’s concept is already around us, and Prototype questions where it will lead…

I’m pleased to announce that I have a new album – Prototype – almost ready for release.

Prototype is a beat-driven instrumental album of dark, heavy and thought provoking electronica.

While I finish the final production tweaks on the music, here is a full stream of Automation.

Prototype will be released as a digital download via my Bandcamp page in the very near future… stay tuned for details!

Here is a guest post I wrote recently for the RetroVideoGamer website, talking about the inspiration of 90s Amiga computer game music: