While the tropes of sorcery and dragons are an inevitable temptation for a fantasy artist, I view fantasy on a much wider scale. For me, ‘fantasy’ is where reality blurs into dreams and nightmares; a place where realism becomes surrealism and a portal into fantastical worlds and times, where nothing is impossible.

These works take influence from speculative fiction, traditional fantasy and the deepest recesses of our dreaming minds.

VOID (2015). A dark and forbidding cave stretches in front of us. The prospect of what exists in the void beyond is enticing. Or threatening. There are small, feeble plants on the floor which could not exist in the dark depths of any cavern, so it could be that we stand at the outside entrance, in which case we could easily turn back from what faces us. But perhaps their stunted life is possible because of the strange light which appears to pervade this place from the rocky walls. If so, we may already be deep into the ground, and returning to the surface may not be easy. We must go forward. By the stream which moves sluggishly through the cave, a human figure crouches, looking away into the depths. We are uncertain whether he is a modern man – he holds a burning taper rather than a torch, so he may be from some primitive tribe, or possibly he is one of our own kind long trapped in this existence and making use of whatever tools he can find. His stance is one of expectation – there is someone, or something, in the cave ahead which he knows will emerge at any moment. Is he predator…or prey? Text: Richard Hayes

SUBMERGENCE (2011). La cathédrale engloutie – the Sunken Cathedral – is one of the most evocative of the piano preludes of Claude Debussy, based on an ancient legend of a cathedral submerged off the coast of Brittany, which might rise again and be seen through the waves. The image is powerful – a once majestic structure, standing proud as a symbol of mankind’s praise of a deity, or possibly of man’s dominance of his fellow man, now lies in ruins at the hands of the elements. Most of the large town of Dunwich on the Suffolk coast was swallowed up by the sea during storms from the thirteenth century onwards. There are myths that, even today, the bells of its sunken churches may be heard tolling when sea currents are fierce. Such thoughts of what was once great, and is now lost, strike deep into our soul. The fact that such devastation can occur to our ancestors’ most glorious achievements leaves us with the knowledge that our own civilization remains impermanent and vulnerable. Nothing lasts forever. Text: Richard Hayes 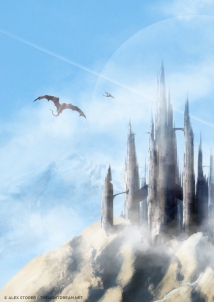 HOMECOMING (2017). A mountainous world orbits a vast ringed planet, seen dimly through the clouds and blue atmosphere of this alien land. Amongst the snow-capped peaks stands a bleak castle, grim and forbidding, its stark pinnacles harsh against the frosty sky. It has all the appearance of a fortress in its impregnable position – surely no-one would venture to enter such an edifice uninvited? Yet two beings are moving towards it with purpose, flying through the air like mighty dragons out of myth. This may be their home, and they are returning after a long journey elsewhere in this unearthly landscape. They may even be members of the race that built this fort, and perhaps others of their kind await their return with friendship after a lengthy parting. But the structure is strange to our eyes – surely no flying being would need the walkways which link the towers of these buildings. It was not constructed with them in mind as its main inhabitants. So possibly those within its walls anticipate a less friendly homecoming when these creatures arrive. After all, who could witness the arrival of such powerful beings without at least a little trepidation at what they might bring? Text: Richard Hayes 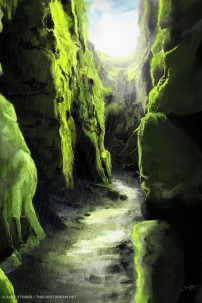 LUD’S CHURCH (2017). The remote locations of our world conjure up images of lonely and forgotten regions where few venture – places to hide from others, and places of sanctuary. This picture was inspired by a walk through the mysterious crevice known as Lud’s Church, hidden away in the Black Forest of the Staffordshire countryside near Gradbach. It may have once been a 15th century Pagan worshiping ground and is rumoured to be haunted by a ghostly green man. It is also believed to be the basis for the Green Chapel of the medieval poem ‘Sir Gawain and the Green Knight’, and we cannot be surprised that such a romantic setting would lend itself to tales of the unknown and supernatural. Inevitably, it would equally attract the renegades who seek to hide from the authorities of their time – it is said that Robin Hood, Friar Tuck and Bonny Prince Charlie are all reputed to have hidden within this chasm. Which causes us to wonder what lies around the next corner of this gloomy cleft in the rocks. It might be welcoming or threatening. It might be a danger that is very much of this world. Or it might be something entirely different… Text: Richard Hayes

THE WIZARD’S EXIT [WEXIT] (2010). A robed figure shambles through a weird and unnatural setting. At first sight, we suspect these may be towering tree trunks whose roots spread across the ground, but they seem too regular and there is no sign of growth about them. It may be a petrified forest, or possibly the interior of an ancient hall where cracked and weathered columns stretch up to an unseen roof, but we are mystified as to who could have designed such a peculiar building. There is no doubt, from his clothing and demeanour, that the person is a wizard, and he walks towards the outside where we see clouds and two birds gliding through the air. But the focus of our attention is a strange sphere or circle set on a plinth. There are steps leading up to it, so it is something which we are expected to enter, and that is what this aged sorcerer intends to do. From his long studies of magical lore, he may know where he is going, or this may be a journey into the unknown for him. Whatever his purpose, though, something unusual awaits him on the other side of the portal. Text: Richard Hayes

SCENE FROM A DREAM (2014). This is a scene I’ve been intending to try and capture for some years, and it is taken from a vivid dream I had back in February 2000. “It is very early morning and there’s no-one else around. I eventually reach the city perimeter, which is walled of with an absolutely enormous dam-like structure. I find some rickety makeshift steps leading to the top. I climb up to the summit and foolishly look down! There’s an unspeakably large drop leading down to the sea. As I look up, I catch the sunrise, which is beautiful and vibrant in colour, shining bright across the land…” 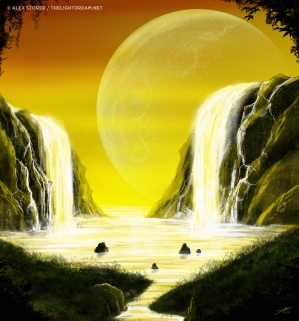 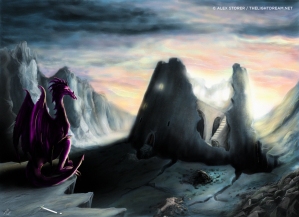 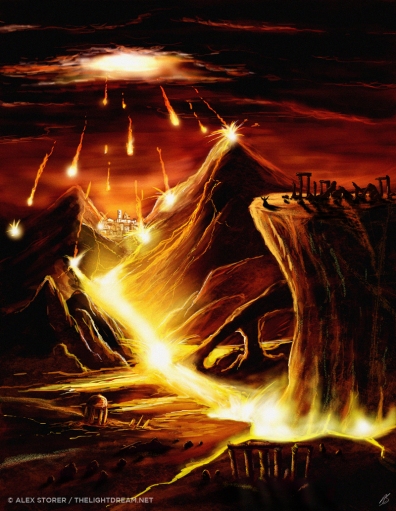 PROPHECY (2011). In a scene reminiscent of the apocalyptic paintings of the Romantic artist John Martin, this depiction of devastation from the skies clearly shows no natural phenomenon. It may be the wrath of some deity, or the magic power of man, that causes this level of destruction. Buildings crumble and cities burn as unimaginable forces are let loose, meteors crash from the cloud-ridden sky and lava flows down to sweep away all that this civilization has built. But our eye is drawn to the solitary figure on an outcrop of rock, standing next to a ruined henge. He wears a robe and holds his arms high towards the source of the carnage. Is he the cause of this great event – the conduit through which the magic flows to bring about the fulfilment of prophecy? Or it might be that he is a victim like everyone else, remaining near his ruined temple and throwing up his hands in despair as he witnesses the awesome sight which he is powerless to prevent. Text: Richard Hayes 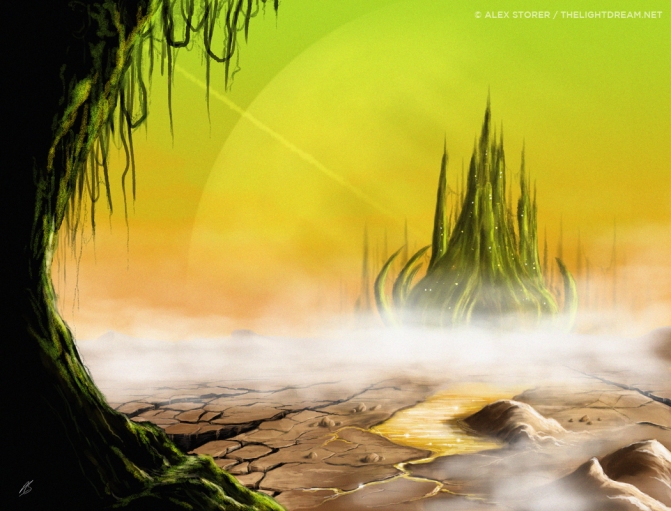 FRONDESCENTIA (2013). Extraterrestrial life may take many forms, but experience on Earth has shown that it tends to evolve to produce similar structures where these are proven to work. Plant life based on chlorophyll is an efficient method of survival where sunlight is available, and here it has evolved on the moon of a distant planet. The plant growths are separated by tracts of barren land which is clearly inhospitable to any life. It looks as though wind-blown spores must have carried plant life through the moon’s tenuous atmosphere to those few locations where it can thrive. There, restricted to a limited patch of ground, it has grown to vast size, stretching upwards to gain ever more of the precious light. But there is a clear impression that the plants have been deliberately shaped and, if we look closely, there seem to be lights on the surface of the structure in the distance. Can this be some alien plant city which has been created as the most suitable habitat on this remote world? And, if so, who are the inhabitants? Text: Richard Hayes

CORRIDOR OF POOR SOULS (2018). A lone figure stands between the high walls of a grim corridor, a dazzling light obscuring the distant end – if indeed there is an end. Our eye is drawn inexorably to disturbing patterns on the walls – skulls and suffering faces indicate souls in torment. Doorways along the sides suggest dark spaces beyond – places of mystery and menace. What lies behind them is hidden from us, but we suspect that the symbols of distress may be a warning. We cannot escape the inevitable conclusion – this is some form of ante-room to an afterlife, or at least to a form of existence significantly different to our own. But the figure is not moving. It seems to hesitate, and there is doubt and uncertainty in its stance. Why does it not move towards the light? Perhaps it may desire to enter one of the portals, to know what is there and to experience what it offers. Forbidden fruit. Possibly the chance to travel this way may never come again, but will there be a way back once the decision is made? This may be the very choice that faced Adam and Eve in the Garden of Eden – a choice that will dictate everything to come. A choice that every one of us might face one day. Text: Richard Hayes